Be Who You Want to Be

"Be Who You Want to Be" is good advice, I think.  It's too hard trying to be someone you're not, and life is much too short to force yourself into someone else's mold of what they expect you to be.  The trick in following the advice is to first determine who it is you want to be, and then actually take the steps necessary to become that person.

It seems like it only takes one step:  I need to write.

Sounds simple enough, doesn't it? Yes... But there's a little bit more to it.  For one thing, there are varying degrees of "writer" -- I could fill boxes and boxes with random gibberish scratched on notebook pages and store them in my basement, and technically I'd be a "writer."

But that's really not what I want.  So I need to be a little more specific:  I want to be a writer whose work is read and appreciated by others.

Now it gets a little more complicated.  I not only have to write, but I have to write things that readers will enjoy and appreciate AND I have to find a way to attract readers and get my work to them.

Well, the good news is that I'm writing.  And I think I'm writing things that (given enough editing) might be enjoyed and appreciated.  However, that last thing is really the tricky part -- attracting readers and getting my work to them.  This is basically the whole publishing world in a nutshell.

Plus, I realize -- "attracting readers" is also one of the main reasons I fisrt started blogging. Having an online presence is needed to help readers discover your work, and to interact with them once they have.

So writing alone is not enough, and while I am definitely going to keep that going, I also think I need to return to a much more active presence my neglected blog. Heck -- even posting on a consistent once-a-week basis would be an improvement.  So, beginning today I'm going to shoot for that.

And to start it out, I'll offer a quick bit of writing and a musical piece that completely fits this post. 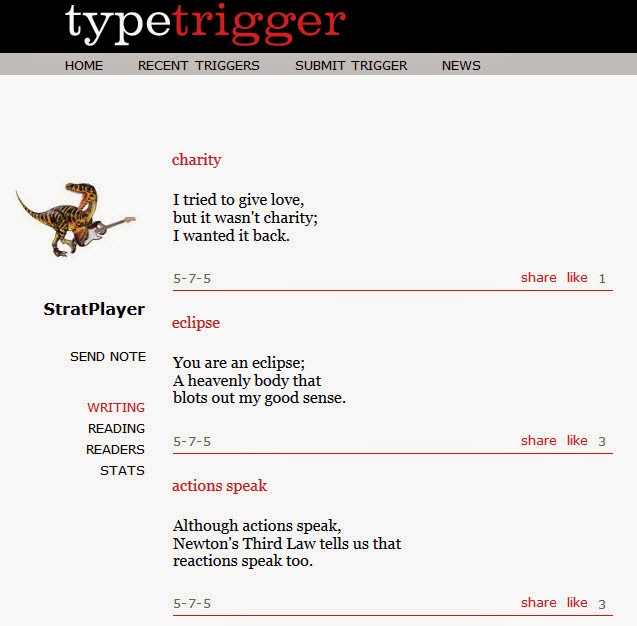 In the interest of brevity, how about some of my recent off-the-cuff submissions to the fun writing prompt site TypeTrigger.com?

Because I'm working on so many other things, I'm not spending a lot of time on the TypeTrigger site -- it's just a fun way to stoke the creative juices before moving on to other things.

I've discovered I like the 5-7-5-ish syllable Haiku-esque approach, and it's kind of surprising to see what comes out of my subconscious when I go off of a given prompt.  Sometimes it's humorous, and sometimes it's a little darker, and it's often-times not something I expected.

You can visit My Page on the TypeTrigger site to read all of my stuff, but here are a couple of ones I did recently that I particularly liked (the titles are the site-generated prompt words):

Your Scrabble tantrum
subsides -- but our shag carpet
is now a tile floor. 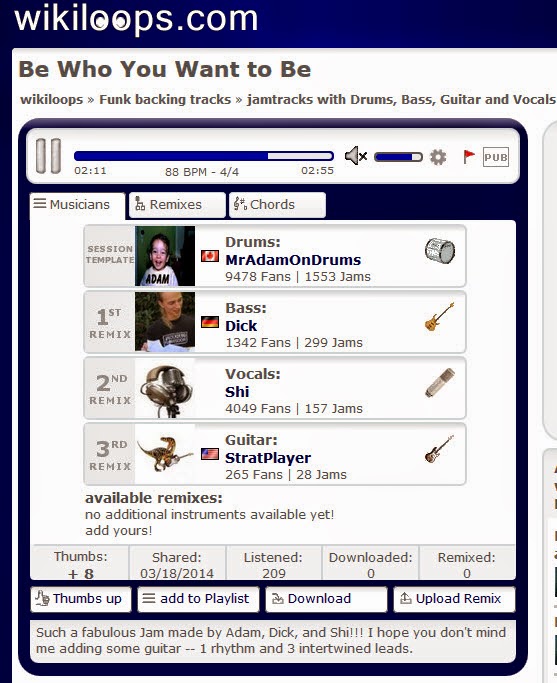 Be Who You Want to Be is also the name of a jam I uploaded to wikiloops.com back in March.  Click on the link under the title or on the picture to the left to check it out.

It's an older piece, but one that I really like. It was built on an awesome track with drums by "MrAdamOnDrums," very cool bass from wikiloops founder "Dick", and vocals by the wonderful "Shi". I added a funky rhythm guitar and several multi-tracked lead guitars to it.

I love the way this jam came together -- Shi's great singing gives it a very cohesive structure, and the "da-dat-dah" vocal breakdowns over Dick's bass line adds for a lot of interest.  I wanted to do what I could to have my guitar parts add to the song instead of overwhelming everything. I tried hard to stay out of the way of Shi's voice, and worked to double (and harmonize) the breakdown line rather than riff all over it.  The leads are a little looser, but even then, I tried to give them a structure that hopefully embellished the jam instead of just flailing away on "hey, lookit me!" solos.

Thank you for reading and listening! I hope you enjoyed my writing and music -- feel free to comment, even if you didn't.

Update: Upbeat about the Upswing


Wow -- it's been a while since my last post, hasn't it?  As happens far too frequently, I've once again left this blog to gather dust while I've been off doing other things.  But since this is a blog that is supposed to highlight my creative output, I suppose I should... um, highlight something or other.  Or at least give an update on what I've been up to lately -- if you're up for it.  So let me touch on my writing and musical activities lately:

The good news is that I'm writing again -- pretty regularly.  I'm quite happy about the upswing in the amount of words I've been getting onto the page lately. For one thing, I've revisited an older, oft-rejected short story, and have had some insights on ways to breathe new life into it.  I'm radically restructuring it, altering the story arc, and hopefully increasing the tension and conflict.  I'm also trying to give it more of a self-contained story feel.  While it could still serve as the introduction to what could perhaps become a much-larger science-fiction novel, I'm optimistic that this finished version will be better able to stand on its own as a short story.

I've also been busy heavily researching a detective mystery set in the 1940's Detroit area.  This is actually using an old serial piece I once wrote for the now-defunct Creative Copy Challenge website as its inspiration, but altering the timeline (1940s instead of 1950s), tweaking the characters, altering the plot, and expanding the story for a novel.  I have the basic story already set in my head and roughly outlined, and I'm eager to see it come together.  I've had two other novels that fizzled out before they were finished -- I consider them part of the necessary process of honing my writing skills. the time spent on both was extremely beneficial in helping me learn how to structure a novel and improve my writing, but I think my writing ultimately outgrew both stories before they were finished.  Someday, I may revisit them, but for now, I think of the many incomplete revisions of both to be like the stepping stones needed to get to this book. This novel could also serve as a launching point for what might very easily become a series of books, with a captivating character and a setting of the drama-filled time of WWII and the 1950s, in a city that was "The Arsenal of Democracy" and one of the most segregated areas in the country.

And I've also signed up for an online critique group with my good friend DL Hammons, whose WRiTE Club 2014 kicks off next week.  I'm excited to see how this group evolves -- I'm also hopeful that it will help keep my nose to the grindstone writing-wise.  I don't want to be the weak link of the group who never has anything to offer.  And by the way -- in case if anyone was wondering -- while I'm definitely looking forward to another fun year of WRiTE Club, I have not submitted anything myself.

Plus, I've found a site that is geared towards a quick dose of inspiration and a short burst of output -- the site Type Trigger.  It's evidently been around a while and appears to not be too heavily maintained, but it's a fun place to spew out some impromptu morsels of writing.  I'm posting there under the name of StratPlayer.  You can use the link to see what I've written so far.  It's kind of fun -- Each short prompt allows you up to 300 words, and the prompts come and go several times a day.  but once you submit, there's no going back.  You can't edit it.  I've missed typing in some words in a few prompts I've posted, and now they're stuck.  But still, the concept appeals to me.  It reminds me of what Bill Evans wrote in the liner notes to the all-time classic Jazz album Kind of Blue by Miles Davis: 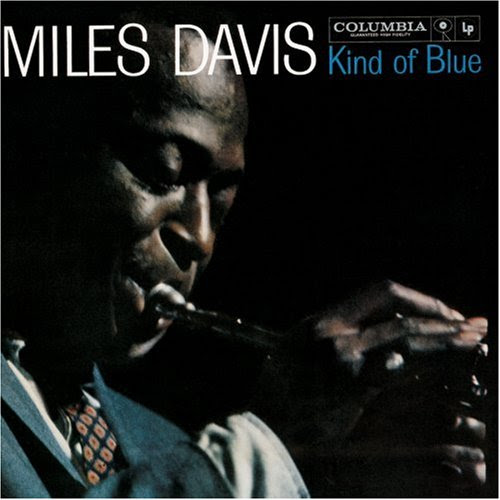 "There is a Japanese visual art in which the artist is forced to be spontaneous. He must paint on a thin stretched parchment with a special brush and black water paint in such a way that an unnatural or interrupted stroke will destroy the line or break through the parchment. Erasures or changes are impossible. These artists must practice a particular discipline, that of allowing the idea to express itself in communication with their hands in such a direct way that deliberation cannot interfere.

The resulting pictures lack the complex composition and textures of ordinary painting, but it is said that those who see well find something captured that escapes explanation."

Each prompt has a short life of a few hours:  You're faced with a limited amount of time to be creative on any given prompt.  Then what gets posted is locked -- erasures or changes are impossible. It find that it forces me to be in the moment as a writer (although I evidently need to hone my proofreading skills).   I'm not exactly sure why, but I've found that it somehow inspires me to dabble in Haiku-like responses, with variations of 5-7-5 syllable structures. Probably because others do it too, plus there's also that association with the "Japanese visual art" Bill Evans mentions...

Yes, I realize that it does take a certain amount of chutzpah to transition from a mention of Kind of Blue to my own music, and I certainly don't mean to suggest that my hobbyist recordings are on a level with Miles, but I would be remiss in not including some mention of my musical activities as part of a "creative output" update.

I haven't done much jamming at wikiloops lately, but I'm working on finishing up another piece in my "Forgotten Radio" collection, like Streak of Moonlight, which I posted here back in April.  However, it's not quite done yet.  I've also played in the worship team at church three out of the last four weeks, and that took a chunk of my musical efforts (practice Thursday, run-through and service on Saturday, and then run-through and three services on Sunday). Plus, this current piece I'm working on has undergone kind of a weird transformation -- several edits and revisions, and at one point, I nearly scrapped it.  But now, I'm liking it. We'll see how the finished piece turns out and how I feel about it then -- I'll post it as soon as it's done.

But I can't let you go without at least offering you something to listen to, now can I?

So here's a piece from several months ago that I call "Drone."


This was a quick piece I threw together back when I was just starting to mess around with my new bass.  The drums are just a basic beat loop, and the chord progression is just a simple two-chord drone.  But I like how the first guitar morphs into the rhythm and I think the distorted lead guitar worked out surprisingly well.  For much of the same reasons as I like the idea behind TypeTrigger, I like this -- it was done off-the-cuff, with no editing, erasing, or changing.  I hope you enjoy it also.

Thanks for reading and for listening!